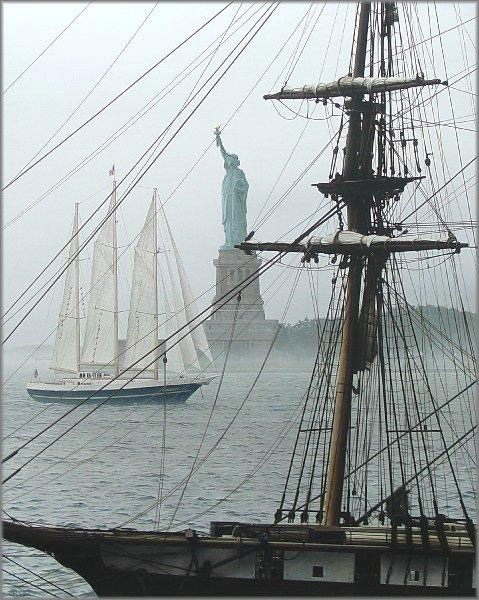 Rod has visited Lady Liberty many times with his family both before 9/11 and after. “Climbing to her crown was an unforgettable experience. I’d wanted to paint the statue for some time, but it was only after seeing her with the tall ships that I knew I had a painting. The Grand Lady stands in the center of the canvas carefully framed by the ships. It was a little nerve-racking painting all the ropes and lines. I paint in multiple thin layers and cannot cover mistakes in sky areas without completely starting over. Even though this scene appears to be from long ago, the cropping in this composition is definitely contemporary.”

INTERESTING FACTS ABOUT THE STATUE OF LIBERTY… The number of windows in the crown: 25; the number of spikes in the crown: Seven rays of the diadem (7 oceans of the World)…Inscription on the tablet: July 4, 1776 (in Roman numerals)Height from base to torch: 151′ 1″; Height from foundation of pedestal to torch: 305′ 1″Heel to top of head: 111′ 1″Length of hand: 16′ 5″; Index finger:8′; Size of fingernail:13″ x 10″ weighing 3.5 lbs Head from chin to cranium: 17′ 3″; Head thickness from ear to ear: 10′; Length of nose: 4′ 6″Approximate fabric in Liberty’s dress: 4,000 square yards. Bartholdi intentionally clothed Liberty as a classical Roman deity. She wears a “palla”, a cloak that is fastened on her left shoulder by a clasp. Underneath is a “stola”, which falls in many folds to her feet. The ships shown in this painting sailed past Liberty in 2000. Many Tall Ships gathered around her at her 100th birthday in July 1986. It was a sight to behold!