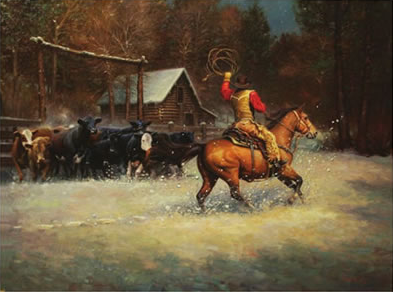 Mark Keathley attended the CM Russell Western Art Museum’s 2010 Show and Sale with two paintings entitled “Jail Break” and “Independence Pass.”   The Auction was different at this year’s show, in that it was set up as two sales.   On Friday night, there was a Wall Sale, where art collectors could deposit their name and contact information on a slip of paper and place it in a box next to one of 120 pieces of art hanging in the museum.  The slip of paper was a silent auction and created a bid from the collector who placed it in the box.  There were over 1,000 western art lovers and collectors enjoying the fine cuisine, open bar, western music, and the friendly company of other Art Connoisseurs.  They all were enjoying the diversity of the fine art represented at the show.

“I arrived that evening in the middle of the event, and never saw anyone put a slip of paper in the boxes.  I was beginning to wonder if anyone there was going to bid on my two paintings at the show”, Mark stated.   “It was kind of nerve-racking; but, when it was all over, and they opened the box, I had a buyer for one of my entries.  My painting, “Independence Pass” sold to Bob Bosworth of Denver Co.  It was great to meet him and chat about the business.”  Mr. Bosworth is on the board of the Denver Art Museum.

The next night was a live auction.  At this sale Mark’s painting “Jail Break” sold for $9,000.    “This was a very successful show for me”, said Keathley.   “Only 40% of the art at the show sold this year, either there were no takers during the wall sale, or the auction price didn’t get up to the artist’s reserve price; so to sell them both for full price was  exceptional.”

Even though sales were less than hoped for, the total event produced much more revenue for the Museum this year than the past year, so everyone’s spirits were up and great things are anticipated for next year’s CM Russell Western Museum and Art Show.
http://www.cmrauction.com/Website/Schedule.aspx

Excerpted from the website:
Biography of Charles M. Russell

Charles Russell is one of the few artists who both experienced and artistically documented the drama and innocence of the American West. As the West was settled, his nostalgia for days gone by was expressed in his depictions of contemporary life on the range.

As a self-taught artist, Russell began drawing and sculpting at an early age. A few weeks before his sixteenth birthday, he left St. Louis and moved to Montana where he worked as a cowboy for eleven years. During those years, he sketched and painted the cowboy life and the wilderness he loved. To cover his expenses, Russell sold his paintings for modest prices to saloons and local establishments, whose proprietors were the first Russell collectors. His first commissioned mural was painted for a saloon in Utica, Montana and was executed with house paints on a pine board.

In 1896 Russell married Nancy Cooper who, as his business manager had a lucrative impact on his artistic career. She convinced him to raise prices and paint full time. By 1911 his paintings were selling in the East for what Russell referred to as “dead men’s prices”, high figures normally achieved after an artist’s death. After 1919, the Russells spent their winters in Pasadena, California. In Hollywood, they befriended western art enthusiasts, many of whom became Russell’s patrons. In October 1926, Charles Russell died in Great Falls, Montana.