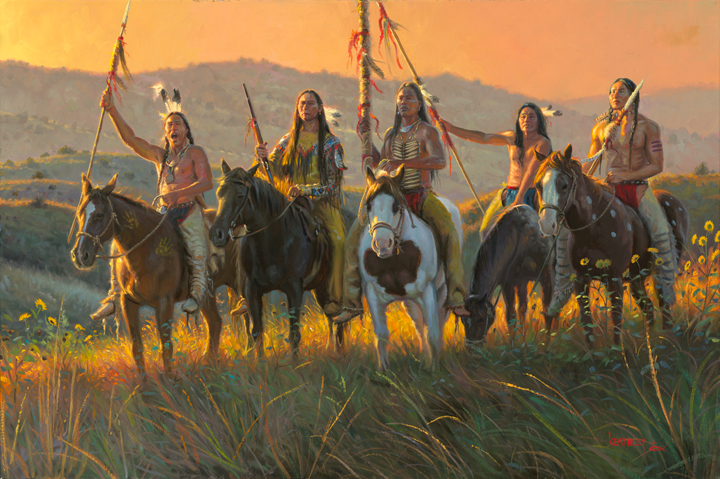 Across the landscape of time, tribes have roamed and settled in areas so they could live by the customs which had been handed down to them and be free in their pursuits and daily lives. It is what causes the spread of civilization – that desire to set up a new world where “it will be different” and “we can be free.” The world as these tribes knew it was only what they experienced, and the boundaries of their world were only as far as they could travel. Territorial disputes might have been common with a neighboring tribe where a brief skirmish would determine the outcome, but nothing could prepare these groups of Native Americans for the tide of settlers which would wash over the land – changing their lives forever. You can use your imagination to picture what these brave warriors were coming to confront, but “Boundaries” is not about the clash between tribes or the coming hordes of white settlers. It is about the determination we have to hang on to life as we know it. For centuries, powerful men have wanted to control the behavior of people. Unjust tactics, propaganda, and force have all been used to take freedoms away from people so that a few can control the wealth and power of nations. This painting is about taking a stand against the forces that would change our lives forever. A line in the sand needs to be drawn, or the freedoms we enjoy in our nation will disappear. Then, we, too, will find ourselves living out our lives on a government reservation.

Above prices represent Publisher’s suggested issue release price.  Each Gallery is independently owned and operated, and
prices may vary.  Also, Limited edition art may sell for higher prices on the secondary market after they are sold out